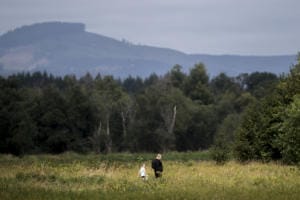 The federal government announced it would change the way the Endangered Species Act is applied, making it easier to delist threatened or endangered species and allowing regulators to conduct economic assessments on potential lost revenue when deciding whether to protect a habitat.

In a media release, U.S. Secretary of the Interior David Bernhardt said earlier this month that the revised rule would ease “the regulatory burden on the American public, without sacrificing our species’ protection and recovery goals.”

The decision drew condemnation from environmental groups, Democrats in Congress and several state attorneys generals. A coalition of environmental groups filed a lawsuit against the administration Wednesday, saying rolling back protections “undermines the fundamental purpose” of the Endangered Species Act. Critics of the change also say new wording in the law, which says regulators should make decisions based on the “foreseeable future,” ignores long-term threats such as climate change.

Eight species living in Clark County are classified as threatened or endangered under the act, including the northern spotted owl, water howellia, and coho and chinook salmon. Two mammals — the North American wolverine and brush prairie pocket gopher — are candidates for the list.

Regionally, lawmakers are split on the changes to the Endangered Species Act.

Rep. Jaime Herrera Beutler, R-Battle Ground, said she agrees with limitations on the Endangered Species Act that keep it from “being abused and distorted by radical urban environmentalists or government bureaucrats to end forest management and put farmers out of business.”

“Our job as lawmakers is to ensure laws are being used for their original intent,” Herrera Beutler wrote in an email to The Columbian.

In the past, Herrera Beutler has supported imposing restrictions on laws she says overregulate the environment. Earlier this year, she pushed forward a bill that would repeal the 2015 Waters of the United States Rule, which she called an overreach of the Environmental Protection Agency. (In response, Washington Attorney General Bob Ferguson signed onto a letter with 14 of his colleagues saying that repealing the rule “would create a gaping hole in water pollution control.”)

Projects within Washington’s 3rd Congressional District, which Herrera Beutler represents, have been hindered by an overly broad application of the law, she added. She pointed to forests in Pacific and Wahkiakum counties, where she said overzealous restrictions to protect the marbled murrelet are causing economic harm.

“Through the years, the law as written has produced some devastating unintended consequences including killing rural communities and helping turn our federal forests into disease-prone tinderboxes,” Herrera Beutler wrote. “I’m hopeful that reasonable updates to the (Endangered Species Act) will allow us to accomplish all our goals: Protect our vulnerable species and habitat, cease the unnecessary damage to our rural communities, and restore the ability to responsibly manage our federal forests to keep them healthy.”

Sen. Patty Murray, D-Wash., however, said the rollback of the Endangered Species Act could cause irreparable harm to Washington’s endangered wildlife, especially its salmon populations.

“This is just another unsurprising and irresponsible action by President Trump and his administration to undermine the Endangered Species Act and threaten our planet’s future,” Murray said. “I will continue fighting to protect our state’s precious natural resources and hold this administration accountable.”

Earlier this year, both Murray and Herrera Beutler partnered to secure funding for the Ridgefield National Wildlife Refuge, the largest nature reserve in Clark County.

With a $5.25 million grant from the U.S. Fish and Wildlife Service, refuge staff will be able to consolidate their work into a single community building. They’re currently sprawled across the site in a trailer, modular building and three maintenance sheds, Deputy Project Leader Eric Anderson told The Columbian in May. The refuge is also working to build new walking paths and bathrooms.

The upgrades will help the nine-member staff do their jobs — land stewardship, research and community outreach — better, he added.

The wildlife refuge encompasses 5,300 acres along the lower Columbia River, protecting grasslands, wetlands and forests that serve as valuable habitat for endangered and threatened species.

Most notably, the group’s efforts have been instrumental in helping to recover the local population of Columbian white-tailed deer. In 2013, around 35 of the endangered local deer were moved to the refuge. Two years later, the group had swelled to 125, and the deer were downgraded from “endangered” to “threatened” — a testament to the role of protected habitat in saving wildlife from extinction, Refuge Manager Christopher Lapp said at the time.

Currently, the deer aren’t listed at all on Clark County’s online database of endangered or threatened species.

But recovery hasn’t been free. In the city of Ridgefield, local leaders have been waiting for more than two years to start an overpass project that would connect the waterfront area to downtown. The project has been fully funded since February 2016, but the proximity of a Columbian white-tailed deer herd rendered the Port of Ridgefield’s 2008 environmental impact study moot.

The project was finally expected to go to bid this summer, but the port hasn’t announced any updates. Port of Ridgefield CEO Brent Grening did not return The Columbian’s request for comment.

Under the current application of the Endangered Species Act, Herrera Beutler said, unnecessary red tape can tangle progress when conservation and development oppose. A deal to manage Oregon spotted frog habitat in Klickitat County, for example, “was a long, drawn out and difficult process,” she wrote.

“It’s my hope these updates to the (Endangered Species Act) will help make agreements like this easier to reach in the future.”