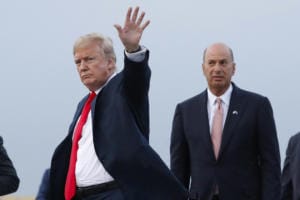 Gordon Sondland, Portland hotelier and U.S. ambassador to the European Union, is scheduled to testify before Congress on Thursday about whether President Donald Trump linked Ukrainian foreign aid to his own political gain.

But for anyone following along from Clark County, it may be worthwhile to know that Sondland, 62, also has a link much closer to home: To Camas-based investment banker, philanthropist and campaign fundraiser David Nierenberg.

Nierenberg and Sondland met in 2006, Nierenberg said in an interview with The Columbian on Tuesday.

At the time, Nierenberg had been working as a regional fundraiser for Mitt Romney — then the Republican governor of Massachusetts — as he began weighing a presidential bid. Romney would become the party’s nominee in 2012.

In late 2006, Nierenberg met with a former fundraiser for then-President George W. Bush. The contact suggested that Romney reach out to Sondland, the founder of Provenance Hotels in Portland, who by then had already developed a reputation as a prolific moneymaker for campaigns.

“He suggested that we try to enlist Gordon to become a member of our volunteer fundraiser team,” Nierenberg said. “For several decades, Gordon had been a very effective fundraiser of large sums of money for candidates for state and federal offices, both Democrat and Republican, but mostly Republican.”

What made Sondland so effective at drumming up donations?

“The courage to ask,” Nierenberg said. “He’s not shy about that.” Sondland also knew how to treat donors well, Nierenberg added.

Over the course of the next five years, Nierenberg and Sondland worked closely together. Nierenberg said he wouldn’t go so far as to call Sondland a friend outside of their shared political goals, but they were familiar as colleagues.

By then, Sondland was already vocal about his desire to become an ambassador.

Near the end of the 2012 campaign, as the transition team started to consider candidates for Romney’s Cabinet should he win, Sondland told Nierenberg he hoped he’d be appointed as ambassador to a German-speaking country.

“Germany or Austria, because his parents were both Holocaust survivors, and he thought it would be a form of justice,” Nierenberg said.

After 2012, Nierenberg and Sondland fell out of touch. Then the 2016 presidential primaries rolled around, and the two men again came together to work on Jeb Bush’s campaign.

“That was the last collaboration, because after Jeb dropped out of the race, Gordon tried to help Marco Rubio. I didn’t want to help Marco. In fact, I went all the way to endorsing Hillary (Clinton),” Nierenberg said.

Sondland’s role in the Ukraine scandal

During the 2016 general election, Sondland became a state co-chair for the Trump campaign. But when Trump insulted a Gold Star family, Sondland decided the Republican nominee had gone too far and backed out of an upcoming Seattle fundraising event, the Seattle Times reported.

A year later, the Washington Post reported, Trump rewarded Sondland’s returned support with a plum appointment: as U.S. ambassador to the European Union.

Over the summer, Sondland received from the president what he called “special assignments including Ukraine.” The arrangement struck many diplomats both domestic and abroad as unusual, because Ukraine is not part of the EU.

On Thursday, Sondland is expected to testify that Trump told him any face-to-face meeting with the new Ukrainian president would need to be cleared by his personal attorney Rudy Giuliani, according to The Washington Post.

A condition of that meeting, Sondland will likely testify, was that Ukrainian President Volodymyr Zelenskiy issue a formal statement that his administration would investigate corruption. Zelenskiy was to single out a company involved with the family of former Vice President Joe Biden, Trump’s leading political rival.

Text messages already obtained by Congress show Sondland, along with Giuliani and special U.S. envoy to Ukraine Kurt Volker, negotiating the details of what that statement would include.

In his conversation with The Columbian, Nierenberg said he’d sent Sondland an email a couple of weeks ago when he first started seeing his former colleague’s name in the news. The two hadn’t corresponded since 2016, Nierenberg said.

Nierenberg said he reminded Sondland that Watergate wasn’t a presidency-ending scandal because of the wiretapping — it was the subsequent cover-up that drove President Richard Nixon out of office.

Nierenberg said Sondland responded to his message and thanked him for the advice.

Now, Nierenberg said he’s worried his old colleague may go the way of a long list of former advisers and Cabinet members “who have served this president to the best of their abilities and have wound up being thrown under the bus by him, being insulted and verbally abused by him on the way out for their trouble.

“I am just profoundly sad that possibly the same thing may be happening to Gordon,” Nierenberg concluded.